Besides a skilled user of Shuriken, Someya-Sensei was a shuriken researcher, having investigated various techniques and types of blades used in other Shuriken schools. Some of his research looked at how to make shuriken fly long distance without becoming unstable. He determined that the length of the Shuriken was related to a steady flight. Therefore, Someya-Sensei constructed Shuriken of different lengths, for which he recorded how they flew, the stability, as well as the distance.

Through his research, Someya-Sensei determined that certain lengths and widths were very effective. This information assisted him in constructing Bo-Shuriken as they are used in Meifu SHinkage-ryû today.

In the 1970’s, Someya-Sensei established Meifu Shinkage- ryû and started to teach his skills and research knowledge to others.  One of his students was Yasuyuki Otsuka. When Someya-Sensei passed away in June 1999, Yasuyuki Otsuka succeeded Someya as Grand Master of the school. Otsuka-Sensei had been a devoted student of Someya-Sensei since 1985, and continued to devote his life to the further development of Meifu Shinkage-ryû. In 2009, the Someya family granted Otsuka-Sensei the title of “Soke”, which means Head of the Family. 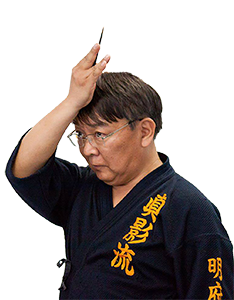 at the Royal Armouries, United Kingdom (2012) 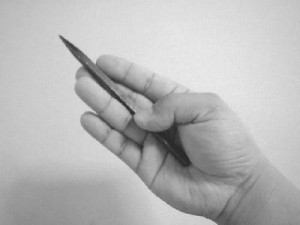 How to Grip a Bo-Shuriken

This technique is common in Shuriken-jutsu. Each Shuriken school has developed a peculiar way to grip a Shuriken. The following two points are quite common:

Gripping the shuriken “point up” and throwing it the target is called Jiki-dahou or normal shot or direct shot. WHen a shuriken is gripped with the point downwards, the technique is called Hanten-dahou or reverse shot. In Meifu Shinkage-ryû, both techniques are practiced.

Almost all shurikenjutsu students have difficulty with long-distance throwing. Shuriken fly by parabolic paths. That path curves steeply at longer distances. That is the action of gravitation of the Earth and is not avoidable. Inclination downward becomes so large that it goes to the point. Generally, if your throwing exceeds ni-ken, the point of Shuriken will turn to the bottom of the target. So, the shuriken moves in an arc to the target.

There is a technical difference in shuriken-jutsu for short distance and for the long distance. However, the technique for throwing shuriken is the same up to the distance from 5 to about 7m.  There is a secret for that in Shuriken-jutsu. 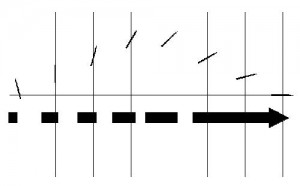 Flight course of Bo-Shuriken to Target

When you throw using short-range techniques, the shuriken will not stick in a long-range target. 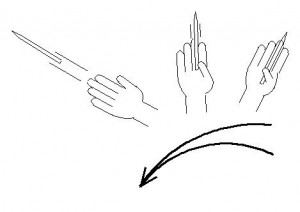 Flight course of Bo-Shuriken to Target

Shuriken is thrown by using the whole of your body.

Shuriken is grasped and an arm is swung down rapidly. With the centrifugal force, the shuriken in your hand tends to jump out. You stop and brake it with your thumb. Shuriken lies along the crevice that runs from your palm to your fingers. Holding a Shuriken this way gives you the ability to provide straight‐power to your shuriken. In addition, correct hip-movement is necessary for proper execution of the technique.

San‐ken (about 5.4m) to Yon‐ken (about 7.2m) is the most effective distance for Shuriken‐jutsu. A beginner trains in about 1 or 2m distance. If you make progress, the distance can gradually be extended.

This site uses cookies. By continuing to browse the site, you are agreeing to our use of cookies. Thank you.